So as part of a Next Level blog by Joe Schloss, we were asked about lessons learned through Hip Hop. Below is a link to the blog and below is the thoughts I had.

Check it out at https://www.nextlevel-usa.org/blog/hip-hop-life-lessons-part-2-growth-is-a-process-hip-hop-is-a-healing-art

“Silence and Hesitation, those are decisions” - Mel Robbins

“Our Minds are designed to stop you, at all cost from doing anything that might hurt you”- Mel Robbins. Hesitation sets off a stress signal to the brain, which in turn sets off the spotlight effect, which magnifies the risk of failure."

Often I am discovering lessons that in reflection I have been passing on to my students in a visceral form and nature? I learned early on, although it is still easier said than done, that if you walk into a jam, step into a circle, hesitate on going in, therefore staying invisible and silent, you probably weren’t are not going in, and if you did the cypher probably died out and the moment has passed.

It was an early Bboy Summit at Balboa Park, the line was stacked, the energy was raw before you stepped into the building. Everybody was there, the ones you might of seen on a vis tape, or the names you only hear in stories. I already knew from past experience that if U walked in, looked around, checked who’s, who in the cypher, I was going to talk myself out of it. I was rocking a true blue fit and was feeling fresh. I walked in through the doors, the building packed, walked directly with intention to the first cypher in front of me and just stepping in with no hesitation! It was a weight lifted, confidence and props from your peers earned and it created a perspective for the rest of the weekend, which will always hold strong.

That single moment taught me that if I believe in myself and allow myself to shine in those moments without doubt, I am also contributing to the cypher, adding value to all involved.

This goes back to the titled lesson. When I hear Mel Robbins speak on this theory lets say, it made so much sense. I already knew this information but hearing it as a natural mechanism to keep us safe from danger switched this perspective of failure when I have hesitated to jump into a cypher. Perhaps it’s a way to protect my Bboy ego to blame it on my brain and not my courage. But it works, I look at that hesitation as me trying to protect me which is a great thing to know that blade is sharp, but also that I can exercise and work that part to serve myself and my communities as an active mover. 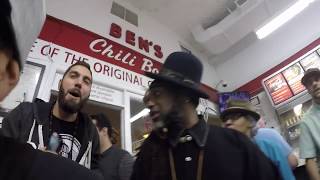